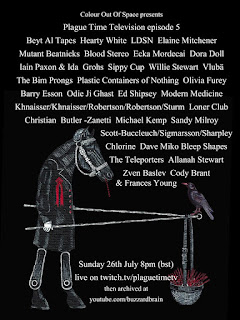 I've thoroughly enjoyed Colour Out Of Space Festival's "Plague Time Television" series thus far and am thrilled to be included (as The Bim Prongs) in episode 5, streaming live on twitch.tv tomorrow! If you miss the live stream, the show will be archived on the buzzardbrain Youtube channel (where you can also watch the four previous episodes!).
Plague Time Television 5
Sunday, July 26, 8pm (BST)
live on twitch.tv/plaguetimetv
afterwards archived at
youtube.com/buzzardbrain
- W.A.Davison
www.recordism.com