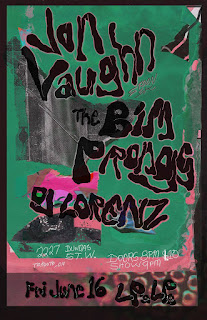 Jon Vaughn is a visual artist, curator and experimental musician living in Saskatoon, Saskatchewan. His sonic work fuses analog electronics, amplified objects and layered soundscapes that express both love for minimalism and free jazz improvisation. Releases of his can be found on labels such as Canadian labels Magnetic Domain, No Type, Panospria and Oral as well as his own Pop Quiz Records, American labels Flish and Slapart and Krakilsk from Norway. Vaughn has opened for artists such as Merzbow and Mats Gustafsson’s The Thing and performed at such festivals as send + receive (Winnipeg, MB), Vancouver New Music Festival, Sounds Like (Saskatoon, SK), Phantom Power (North Bay, ON), and RE:FLUX (Moncton, NB), Suoni Per Il Popolo, Rien A Voir, Sight + Sound and most recently Akousma, his fourth Montreal festival appearance. As a visual artist Vaughn works in drawing, collage, and installation, exhibiting and curating both internationally and across Canada. His work has been featured in many publications, mostly from Europe and continues to operate his own Ecstasy Editions publishing house since 2013. In addition to his work with books and galleries he creates artwork and designs for a variety of products including vinyl records currently holding down graphic responsibilities with Heart to Heart Records from Edmonton. Having a love for collaboration Vaughn also engages in many projects within his eclectic community of friends and peers around the world, often resulting in books, exhibits and even performance art. Vaughn as an artist and designer always is demand yet continues to challenge his brand and his audience with each bold yet deeply considered aesthetic move.

The Bim Prongs is a (mostly) solo experimental music project by veteran Canadian musician and multi-disciplinary artist W.A.Davison, known for his numerous solo projects (Songs of the New Erotics, Th W rbl r, Panic Engines, M.Stactor), his involvement in significant Canadian underground/experimental groups (Phycus, Six Heads, Gastric Female Reflex) and collaborations with prominent artists and groups in the international experimental music scene (Nihilist Spasm Band, CCMC, AMM, MSBR, irr.app.(ext.), Nurse With Wound, Monty Cantsin Amen, etc.). After a break with many of his past projects at the end of 2014, Davison established The Bim Prongs as a kind of "everything, including the kitchen sink" catch-all experimental audio project incorporating a wide variety of strategies and techniques (not to mention a vast archive of recorded material) developed over 30+ years of recording and performance experiments.

Hope to see you there!