July 30, 2012
Songs of the New Erotics will be making a rare appearance at the monthly series In-Between Sounds this Thursday evening. Here are the details:


~~~~~
In-Between Sounds
featuring Songs of the New Erotics
and Lorde Awesome
Thu., Aug. 2/12, 9:30pm
at The Only Cafe
972 Danforth Ave. Toronto
admission is free!
It's time once again for Lorde Awesome's monthly experimental music night, In-Between Sounds. This time out, the Lorde's stage will be graced by a very, very special guest~ Mr. William Davison; he'll be performing as, Songs of the New Erotics. Here's a bio that can't be beat: W.A.Davison is a multi-disciplinary artist who has been producing various forms of experimental art and music for over 25 years. As a composer and improvisor Davison has performed solo (as Songs of the New Erotics, Th W rbl r, M.Stac...tor, etc.), in his own ensembles (Urban Refuse Group, Six Heads), and in various collaborations (with members of CCMC, Nihilist Spasm Band, AMM, MSBR, irr.app.(ext.), Nurse With Wound, and many others). His work has been presented at festivals such as TodaysArt (Den Hague, NL), Art Basel (Basel, Switzerland), Electric Eclectics (Meaford, ON), Dictaphonia Fest (Gainesville, Florida), and The Whitney Biennial (New York City, USA), as well as at various events in Toronto, Montreal, Halifax, Quebec City, London (Can.), London (UK), New York, San Francisco, Tokyo, Buenos Aires, Stockholm, and Sydney. Davison's recorded work spans close to 3 decades and has been distributed on small labels, through informal networks around the world. Songs of the New Erotics is Davison's long-running solo experimental music and performance project established in 1991. Further info on Songs of the New Erotics/W.A.Davison can be found at the following links:

As for Lorde Awesome, you well know what to expect from us by now... that noise we make. "Combining ambient dronescapes with feedback and percussion, Lorde Awesome begets a new ice age, the sound of glaciers carving the earth while the dying mastadon screams its last scream..." If you've not heard much of our work, check out our FB page. We've got some videos on there that span the years... So if you happen to be free and want to catch some pre-Electric Eclectics experimental mayhem, stop by the Only for a pint and some great shit. And hey, it's free! We end at 11:15 PM sharp. Maybe 11:20. Cheers until then! 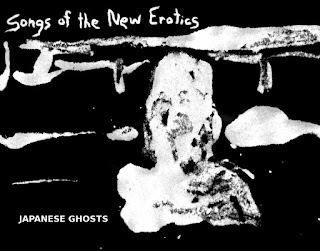 Should be fun! I will also take this opportunity to announce a new Songs of the New Erotics 3" CDR called "Japanese Ghosts" which was released on the Disembraining Songs label last month. Copies will be available for sale or trade on Thu. evening or anytime after from Disembraining Songs (aka me).


Hope to see you Thursday!