September 04, 2010
The latest issue of the Croatian online comix magazine Komikaze has some really great stuff in it (as do most of their issues) but this particular strip by Dalibor Baric is blowing my freakin' mind!

I've been working on a détourned comic that uses anagrams myself...hmmm, should I bother to finish mine? Yeah, mine will be different. But Baric's is sooooooo good! Love it!

Speaking of détourned comics, at TCAF earlier this year I handed out a bunch of flyers to promote the idea of a détourned comics anthology called "La Bande Détournée". Didn't get much response so I put the idea on the back burner for the time being (as you may know, I have a lot of projects). But last weekend at Zine Dream 3 I was speaking with Marc Bell and he said he was thinking about giving me some material for "La Bande Détournée". I'm a big fan of Marc's work so if he's interested then maybe I should take the project off the back burner and put some heat under it! Seeing Baric's inspiring work also makes me think I should push the LBD anthology idea.

So, yeah, check out the LBD flyer and if you're interested in doing something with appropriated/manipulated/détourned comics, or if you know of someone whose work might fit, get in touch with me at davison(at)recordism(dot)com! 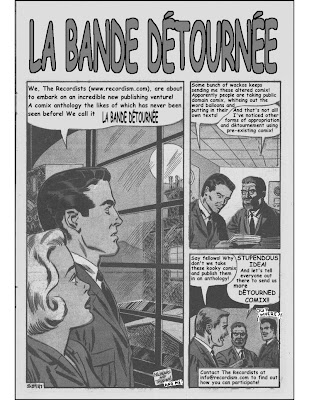